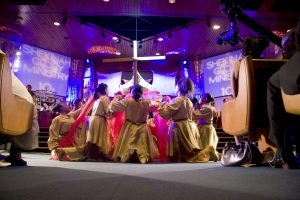 Joshua dusts off the calypso-styled singalong, “Reign Jesus,” from SGM’s 2001 debut album, Praise is What I Do. He transforms it into  a brisk, feel-good dance track emphasizing congas, keys, and bass. The robust choir of SGM voices provide a sturdy cushion on which lay the sweet opening leads of veteran SGM member, Sherree Lee. Then, guest soloist and the song’s composer Cedric Ford’s  raspy vocals take over, exalting the Most-High while also inciting the listener to, “clap your hands everybody, everybody just clap your hands, lift up the name of Jesus.”